Oregon Territory’s first lighthouse was built on the Umpqua River in 1857 to guide ships engaged in the growing coastal trade between California and the Pacific Northwest. These absorbing stories tell of the fascinating history of 14 lighthouse that served the Oregon Coast and lower Columbia River, and Columbia River Lightship station and the lighthouse tenders that served them – all woven into the rich maritime lore of the Beaver State.

Oregon Lighthouses (108 pages) is packed with maps, photographs and useful information, including visitors’ hours and descriptions of those lighthouses and nearby museums, which are open to the public. Published by Umbrella Guide Books, an imprint of Epicenter Press.

Sharlene and Ted Nelson have been co-authoring books for twenty years. They have written several books for Scholastic Library Publishing, including The Nez Perce, The Golden Gate Bridge, and Mount St. Helens National Volcanic Monument. The Nelsons attended the University of California at Berkeley. The Nelsons live in Washington state.

We Live in Alaska, by Constance Helmericks

The Bentwood Box, by Nan McNutt 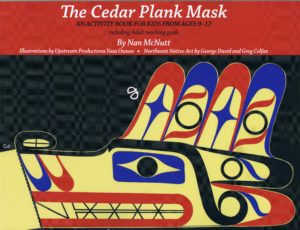